If future plans for human space travel include recurring visits to a Mars Base for research and exploration, an efficient and fast transportation system will be crucial for rotating crews back and forth between Earth and Mars and to resupply needed equipment and fuels. Global Aerospace Corporation has developed an innovative interplanetary transportation architecture that uses highly autonomous, solar-powered, ion-propelled Astronaut Hotels, dubbed Astrotels, which continually orbit the Sun with periodic flybys of Earth and Mars to pick up crews; small Taxis to carry the crews between the Astrotels and planetary Spaceports; shuttles that then transport the crews to and from orbital space stations and planetary surfaces; and ion-propelled low-thrust freighters that deliver cargo to the Astrotels and Spaceports. Astrotels and Taxis enable more frequent transportation of replacement crews between Earth and Mars, with shorter flight times reducing the impact of the solar system radiation environment on crew health. 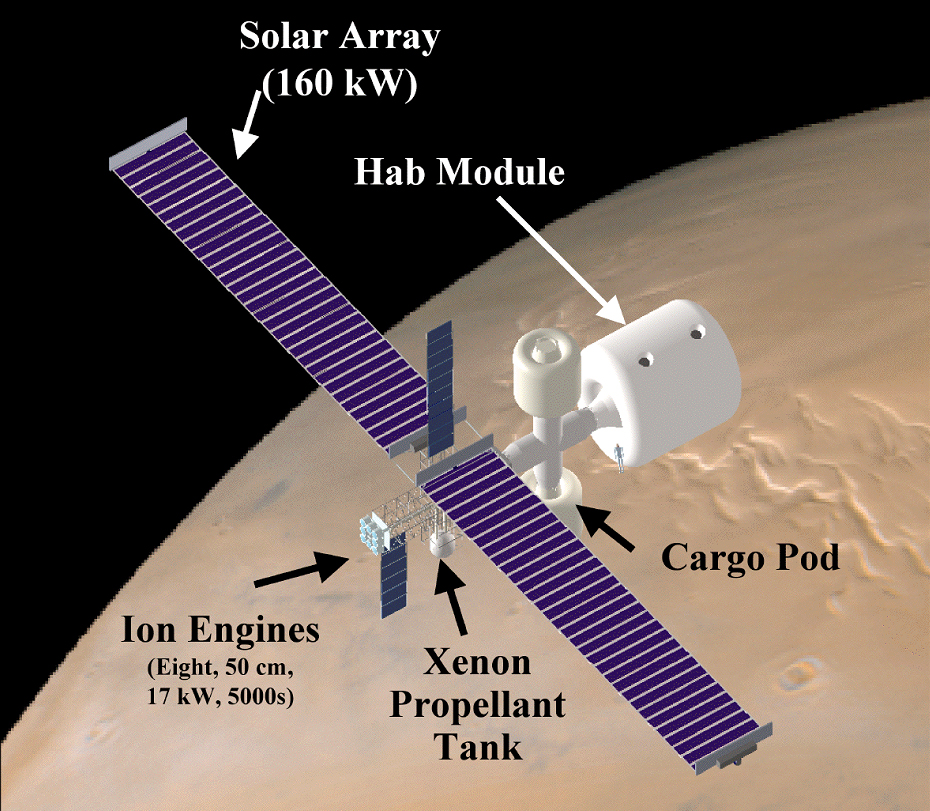 This Earth-Mars transportation system architecture is designed to support a robust, active and self-sufficient Mars Base that would provide scientists and explorers with accommodations, power, planetary and interplanetary communications, food, life support, crewed and robotic mobile and stationary laboratories, exploration tools, resource mining and conversion infrastructure, and space launch and landing facilities. The Mars Base supports significant surface activities in the areas of science exploration, resource surveys, life-cycle maintenance, propellant production, and materials processing and fabrication. Since activities take place at several different sites on Mars at varying distances, a high degree of mobility is required. Crew members must be qualified to perform specialized jobs as well as share duties with others. Two overlapping 10-person crews on the Martian surface carry out these activities. To ensure that the Mars surface is continually inhabited, staggered crew rotations will be required, with overlap between “experienced” and “fresh” personnel. Two crews work on Mars with alternating periods of duty, each of the duration of about 4 years; crew transfers take place approximately every 2 1/7 years, which is the Earth-Mars synodic period.

In addition, the entire Mars Base requires delivery of about 275 metric tons (mt) of hardware to the surface in the buildup phase, about 2/3 of the mass of the current International Space Station (ISS), and about 50 mt of repair and upgrade hardware every 15 years. To support the Mars Base, a means of transporting crews and repair and upgrade equipment between the planets is needed. The Mars transportation orbital and systems architectures provide that means.

The interplanetary transportation architecture infrastructure includes Astrotels, Spaceports, Taxis, Earth Shuttle, Mars Shuttle, a Common Crew Module (installed within each Taxi and the Mars Shuttle), and interplanetary Cargo Freighters. Crews are launched from Earth in a Shuttle, traveling to a Space Station in low Earth orbit (LEO), where they transfer to a Taxi that takes them to the Earth Spaceport in orbit around the Earth at lunar distance. Another Taxi propulsively departs the Earth Spaceport via a multi-impulse delta-V with a perigee burn to place it on a hyperbolic trajectory to rendezvous with one of the two Astrotels looping around the Sun.

Astrotels are highly autonomous, only transport crew and other high-value cargo, use highly efficient solar electric ion propulsion systems (IPS) for periodic orbit-shaping maneuvers, and do not require artificial gravity since crew transit times are short. The Astrotel mass is relatively low: IPS, radiation shielding, habitation, storage, power, and emergency escape pod add up to only one-sixth the mass of the ISS. This significantly reduces the total propulsive energy budget required for course corrections. The Astrotel can house a crew of ten, in a volume approximately 6 times the volume available to Space Shuttle crews, but only about a third of that of the ISS. The small space will not pose a problem as the crew will only travel for 5 months at a time.

Orbits between Earth and Mars can be designed to enable sustained and repeatable human interplanetary transportation through regular encounters with Earth and Mars. Such an orbit is called resonant because there is a synchronous gravitational relationship between it and the orbits of Earth and Mars that can be expressed as a simple ratio of their orbital periods. The Mars Exploration Transportation Architecture uses a type of resonant orbit designated the “Escalator Orbit,” in which the Astrotels continuously loop around the Sun between Earth and Mars in these orbits. The shortest part of the orbits between planets takes only 5 months: the one going from Earth to Mars is designated the “Up Escalator” and the one from Mars to Earth, the “Down Escalator”. The Architecture involves two Astrotels: one takes a crew from Earth to Mars on the Up Escalator part of the orbit, and the other takes another crew back to Earth on the Down Escalator. The “escalator” description likens the trip with attempting to travel up a down escalator. That is, crews could use the “Down Escalator” orbit to get to Mars, however the trip would take nearly two years, hence undesirable. Because of the Astrotels’ momentum, they remain on the desired trajectory with relatively little fuel needed for course corrections. They can orbit the sun indefinitely and at the same time can be periodically maintained, improved, supplied with orbit correction propellants, and given more cosmic ray and solar-particle radiation protection. New technologies can be incrementally incorporated if they can be shown to reduce operating costs, increase reliability, or improve safety.

Up and Down Escalator Resonant Orbits

Just before the actual arrival at Mars, the crew transfers from the Astrotel to a Taxi, which then flies a hyperbolic planetary aerocapture trajectory to the Mars Spaceport, near or even on Phobos. Aerocapture takes maximum advantage of Mars’ atmospheric drag to slow the Taxi, greatly reducing the need for propulsion and, therefore, for propellant and propulsion systems. The Taxi aeroshell can be designed to fit the crew modules and propulsion systems behind it. Its design is based on an elliptical raked cone design, providing a flexible payload placement with a large volume and center-of-gravity location and offering large lift to drag ratios by adaptive roll/pitch maneuvering during aero-cruise. This aeroshell design results in less g-load on crews and reduced overall entry heating during aerocapture. Crew accommodations in the Taxi will be Apollo-like in volume, and life support systems will be similar to Apollo except more advanced in technology. The crew module design must account for the gravitational force directions during both propulsion and aerocapture: the crew is provided g-seats that rotate in order to accommodate the varying g-load direction and the different vehicle-relative thrust direction during propulsive maneuvers compared to aerocapture maneuvers. The Taxi will be able to dock with the Astrotels and Spaceports—both near Mars and near Earth—and while docked it will maintain propellant temperatures to avoid propellant boil-off. The Taxi is designed to operate only in space or during aerocapture maneuvers. 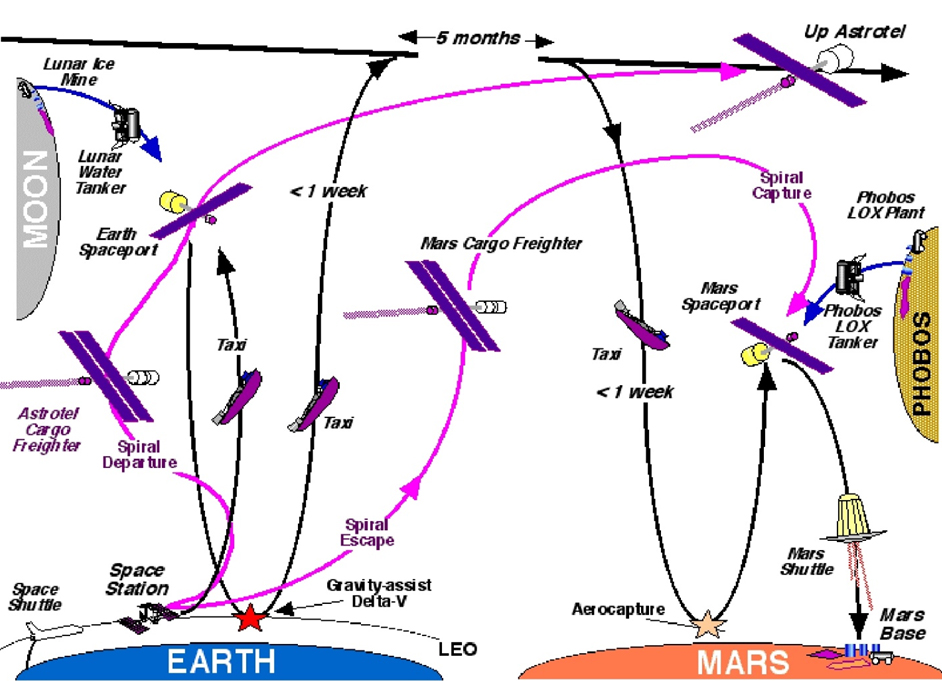 Overall concept of operations for the Earth to Mars flight profile 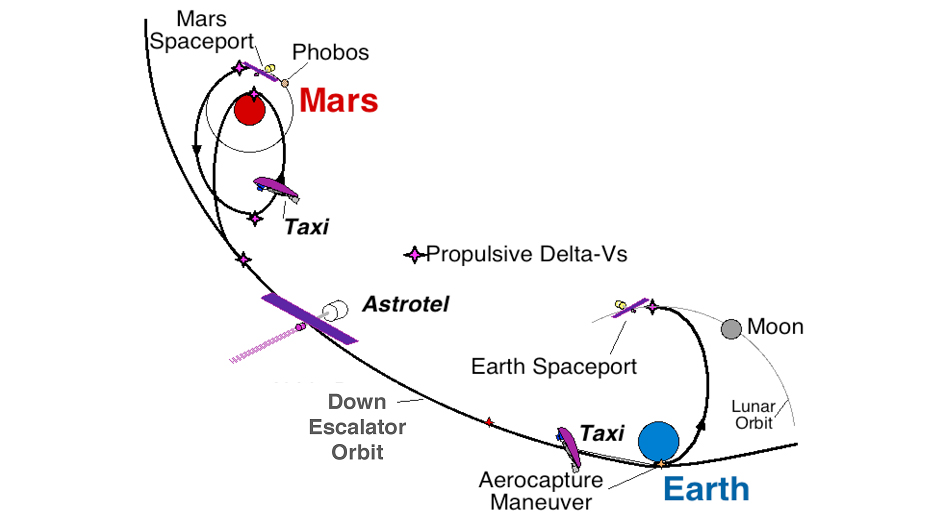 Overview of crew transport from Mars to Earth

The Earth and Mars Spaceports will be derived primarily from the Astrotel Human Interplanetary Transport heritage. They will use solar electric propulsion for station-keeping and phasing orbit corrections. The Mars Spaceport may be required to have artificial gravity since the first crew to Mars will spend over a year there. The Mars Spaceport is located near Phobos (chosen for in situ oxygen and possibly water production). 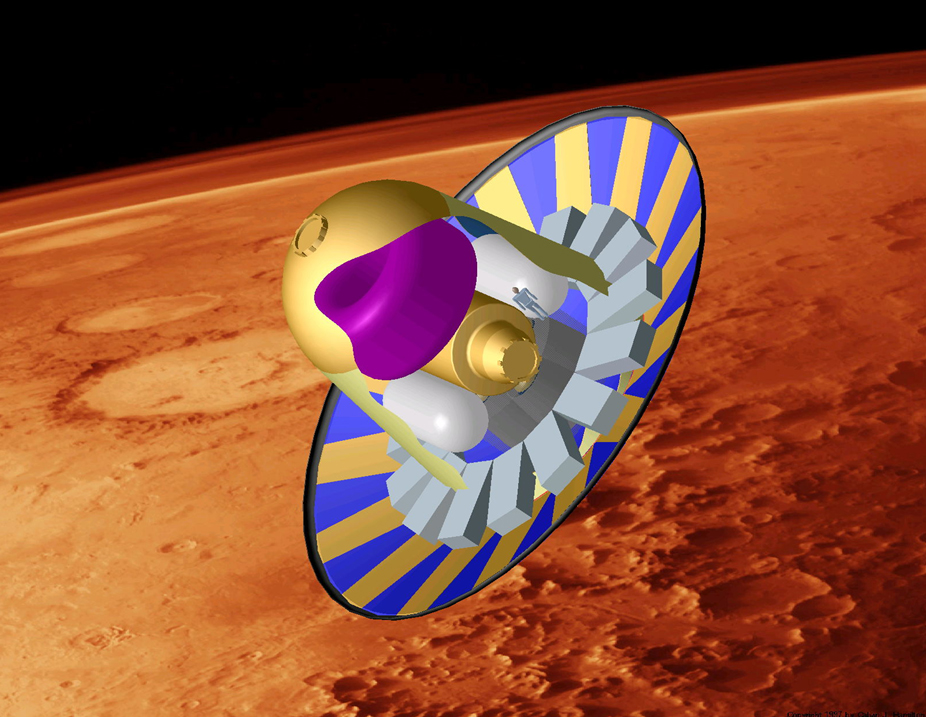 This transportation architecture takes advantage of in situ resource utilization infrastructure for the mining, production, processing, and transport of water into rocket propellants and its storage. The application of these orbital, transport vehicle and resource systems concepts serve to reduce overall mission development costs and improve overall mission reliability and safety. Human exploration could benefit from a focus on future permanent Mars habitation, instead of brief and expensive expeditions. Embracing a sustained transportation architecture early in an expedition phase means that permanent Mars inhabitation will progress more rapidly, with better-defined technology goals, and with lower development and life-cycle costs. In this way the architecture drives technology rather than the technology driving the architecture. The Mars transportation architecture can lead to near-term development of intermediate systems of immediate benefit to human space exploration, which can play a part in the expedition phase of human Mars exploration. The inevitability of human Mars exploration will be much closer once we begin taking these steps.