Global Aerospace Corporation (GAC) has experience in the design of deep underwater systems operating at depths of down to 6,000 meters. GAC has specific experience in the integration, deployment, and operation of systems at deep ocean depths.

We have developed and patented a system that can assist crews of a disabled submarine (DISSUB) to reduce the pressure of crew compartments to increase their chances of survival and improve the possibility of rescue.

GAC is introducing new approaches to deploy unmanned systems that can provide non-lethal effects or situational awareness over large maritime areas. We have the experience to create underwater systems that can survive for many years under extreme pressures, operate reliably, operate through the water column, and deploy operational systems. Our systems engineering experience is in deep ocean apparatus design, deployment, and mission execution, as well as in pressure tolerant encapsulation systems and communications. We can define and carry out system-level requirements, create conceptual designs, perform underwater testing, develop mission and concept of operations, develop payloads, and perform prototype testing.

GAC has carried out independent research and development activities related to the development of, and use of, underwater diver breathing systems including a submersible aircraft project that could be used by Special Operation Forces (SOF) during submerged transit to shore insertion points. GAC personnel have extensive experience in the understanding of the physics and the design of systems that operate in hostile, extreme environments. In particular, the senior engineering staff members have expertise in structural and stability analysis, in the design of life support and buoyancy control systems for manned submersibles, and in the design of critical subsystems including surface propulsion, submerged propulsion, ballast, energy storage, life support, and controls integration.

GAC has patented a passive system for relieving the pressure within distressed submarine (DISSUB) compartments (US 10,683,071) in scenarios similar to the following:

DISSUB Scenario. Onboard a US Navy submarine in a remote corner of the world something is seriously wrong. The aft engine compartment has partially flooded, trapping 40 members of the crew, and all but emergency power is offline. The submarine sits on the bottom in 1,000 feet of water where the water pressure is about 30-times surface atmospheric pressure. A Submarine Emergency Position Indicating Radio Beacon (SEPIRB) buoy that communicates with satellites has been launched to the surface, but it could take several days before ships with rescuers arrive.

The pressure in the flooded compartment is twice sea level and the air is so foul that the Built-In Breathing System (BIBS) is being used and adding to the compartment pressure every minute. While the flooding has been halted, breathing air at high pressure for a sustained period of time can significantly increase the likelihood of crewmember incapacitation or injury. Furthermore, without intervention the compartment could be at a pressure 5-times sea level (5 ata) after four days, well before rescue. Couple this situation with the fact that current Navy rescue vehicles requires a compartment pressure no more than 5 ata, makes rescue a very significant, if not impossible, challenge after just four days.

However, with a simple and passive Submarine Compartment Pressure Relief System (SCPRS – pronounced skippers) already stored onboard, a crew could stabilize the compartment air pressure without external assistance or submarine energy sources, and significantly increase their own chances of a safe rescue. SCPRS could be stored onboard current submarines or installed permanently on the external hull of retrofitted or new submarines. The Problem. As described above, there is a high probability that a distressed submarine (DISSUB) on the ocean bottom could have compartments with internal pressures of greater than 1 ata (atmosphere absolute). Compartment pressurization can result from flooding, which compresses the air into a smaller volume; venting from high-pressure air banks due to damaged plumbing, or crew use of emergency breathing apparatus. Breathing air at high pressures can significantly reduce the chances of crewmembers survival due to 1) increase solution of nitrogen in nerve membranes (nitrogen narcosis) that can cause impairment or incapacitation, similar to drugs or alcohol; 2) increased concentration of oxygen in the body that can be toxic to the central nervous system, lungs and eyes; and 3) decompression sickness caused by rapid decompression upon rescue that can cause dissolved gases in the body to come out of solution forming bubbles that can cause severe pain, paralysis or death. The pressure of 5 ata, a possible compartment pressure, corresponds to a depth of only 132 feet. Since a rescue-capable DISSUB can be located as deep as 2,000 feet below the surface at pressures over 60 ata, decompression is a major challenge and no system currently exists that meets the US Navy’s requirements. In addition, the US Navy’s Pressurized Rescue Module (PRM) is not capable of transporting rescued personnel under pressures over 5 ata from the DISSUB to a surface ship. Moreover, the US Navy cannot rescue survivors from a DISSUB with an internal pressure of 5 ata at a depth less than about 400 ft because the hydrostatic compressive force from the difference between the exterior sea pressure and the interior air pressure that holds the PRM in place is insufficient.

The Solution. To help combat this problem, the SCPRS: 1) creates a physical atmospheric connection between the pressurized DISSUB compartment(s) and the ocean surface, 2) enables venting and equalization of compartment overpressure directly to the sea surface atmosphere, 3) accommodates a wide range of depths from hundreds to thousands of feet, and 4) is a solution that does NOT require shipboard power or excessive crew exertion.

The Innovation. SCPRS is a simple and passive system that can be stored, or pre-installed, onboard and can be used by a submarine crew. SCPRS works by reducing the compartment air pressure by simple venting and pressure equalization to the surface atmosphere without external assistance or submarine energy sources. SCPRS can significantly increase the chances of a safe rescue. This innovation includes the following features:

A portable system within any lockout or escape trunk or a built-in system external to the pressure hull.

Automatically released buoyancy device that rises while unreeling the hose taking it to the surface.

Check valves and other configuration features that prevent seawater from entering hose at the surface, which could restrict pressurized air from venting or allow water to enter a crew compartment.

Operates in combined list and trim orientations of at least 30°.

Global Aerospace Corporation (GAC) is a UFP performer involved in the development of two of the key UFP subsystems: the payload and the riser. In GAC's mission scenario, UFP nodes are deployed years before needed as part of a large, capable UFP network in some distant sea. Each node contains underwater communications hardware, a riser, and a small UAV that can be cued to a desired location. GAC and its R&D partners are developing the Mission Node. The objective of the currently ongoing Phase 2 is to demonstrate a UFP node capable of launching a working payload from a depth of more than 6 km and that meets the UFP metrics.

By exploiting environmental conditions and basic physics, it is anticipated that the riser and the UAV will enable powerful effects with a large influence range at low cost and risk. The technical tasks include mission, effects and concept of operations (ConOps) development; riser development; UAV development; and prototype testing. In the mission, effects and ConOps development task, GAC carried out high-fidelity UAV flight path simulations and detailed mission effects development. For the riser task, GAC carried out the preliminary design and conducted component tests in the lab, test facilities, and at sea and has performed the detailed design and fabricated and assembled the system.

GAC conducted the preliminary design of a submersible aircraft for special operation forces' insertion and extraction. GAC addressed the technical challenges for combined fast amphibious, submersible, and air vehicles capable of transporting four SOF operators with their equipment. The traditional method for insertion and extraction of operators on contested shores involves the use of submarines equipped with special mini-sub dry docks mounted on their backs. During the few hours of transit from the large sub to the insertion point in the mini-sub, the operators are exposed to the environment, which can leave operators cold and exhausted at the start of the mission. Instead, our approach protects the SOF operators in a dry cabin all the way to the insertion point. The system design tolerates submersion and underwater operation, minimizes the needed ballast mass, and key elements like instruments, flight controls, fuel system, and engines are designed to withstand the subsea environment and still operate successfully afterwards. 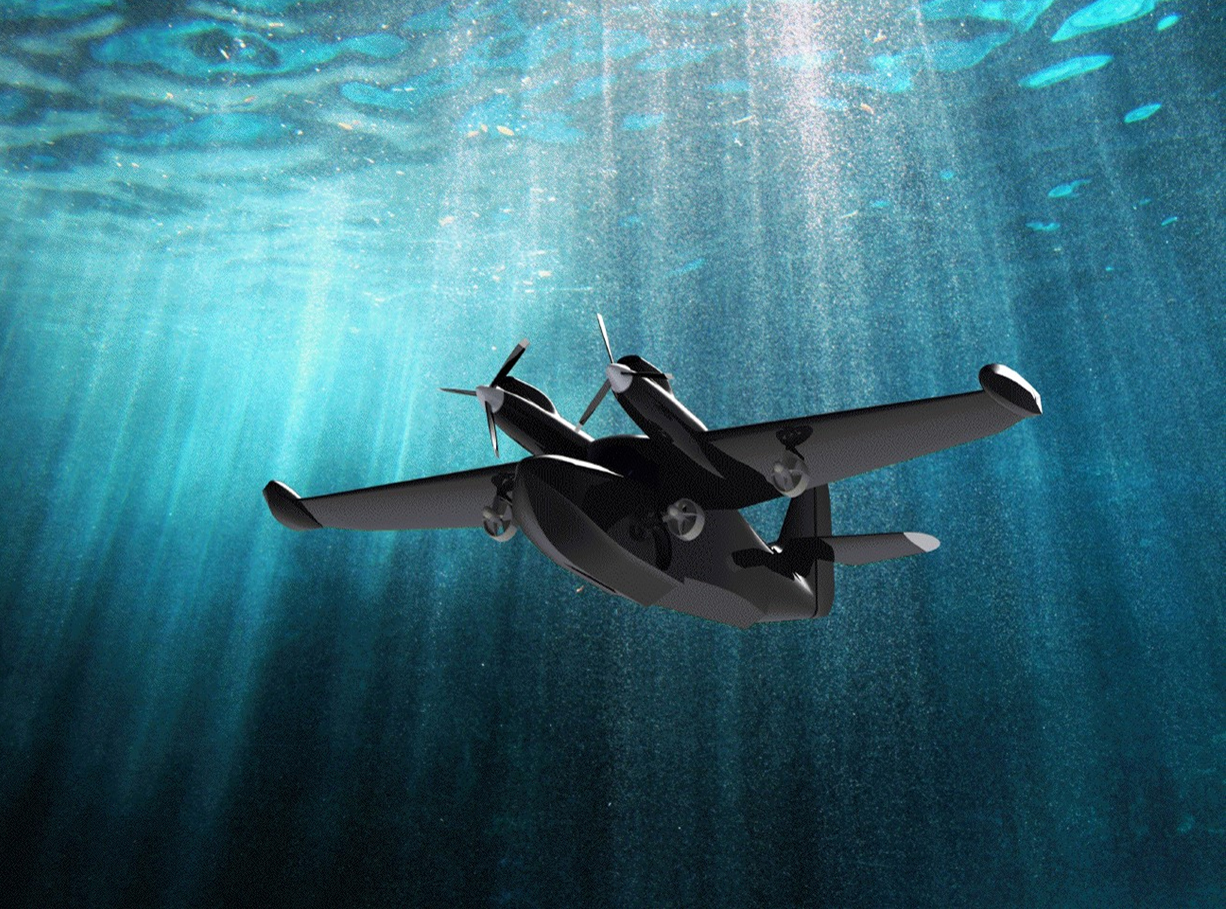