Global Aerospace Corporation (GAC), in collaboration with its research partners, has been developing a state-of-the-art, object-oriented, first-principles-based desktop modeling and simulation system, called Dakota, that can reproduce the actual behavior, life and performance of Li-Ion cells and batteries under a variety of operational modes and environments.

Current battery performance prediction tools consist of full physics models (FPMs), empirical-based models, and first principle-based approximations or reformulations of the full physics models. FPMs usually do not include a comprehensive set of cell degradation mechanisms, and long-duration multi-cell battery life simulations are not feasible due to lengthy run times. Empirical models can only give accurate predictions when a battery’s operation exactly matches the tested cell or battery from which the model input data were obtained. First principle-based simplified or reformulated models of the FPMs can be much faster, since their simplifications or equation reformulations significantly reduce the amount of computations required.

Dakota is an example of a first-principle-based simplified or reformulated model of an FPM. The advantage of the Dakota tool is that it is based neither on empirical cell test data nor on particular cell chemistries, but instead incorporates and extends simple Single Particle Model (SPM) equations and includes user-defined cell and battery design parameters that enable simulation of more complex charge and discharge profiles. Another advantage of Dakota over other simplified or reformulated models is its time-integratable, object-oriented software system that retains the physical and chemical connection to the first-principle models, which facilitates the addition and validation of new capabilities, including new Li-Ion chemistries, new degradation mechanisms, and more accurate, but still simplified, formulations of the full-physics and chemistry.

Object-oriented programming is ideally suited for simulating complex physical systems, such as batteries, and was accordingly used to construct the Dakota software models for the physical components of batteries. In object-oriented programming, functions and data are not treated as separate entities, but are grouped together into an object. A program is a collection of such objects that communicate with each other, changing the internal state within any one of those objects. In the case of Dakota, the simulated battery is an arrangement of cells that interact with each other causing the battery’s charge to change. In Dakota’s software system architecture, elements of code take on elements of the physical problem including battery, string configuration, cell, electrode, electrolyte, and separator software objects. Below is an example comparison of software and physical battery designs. 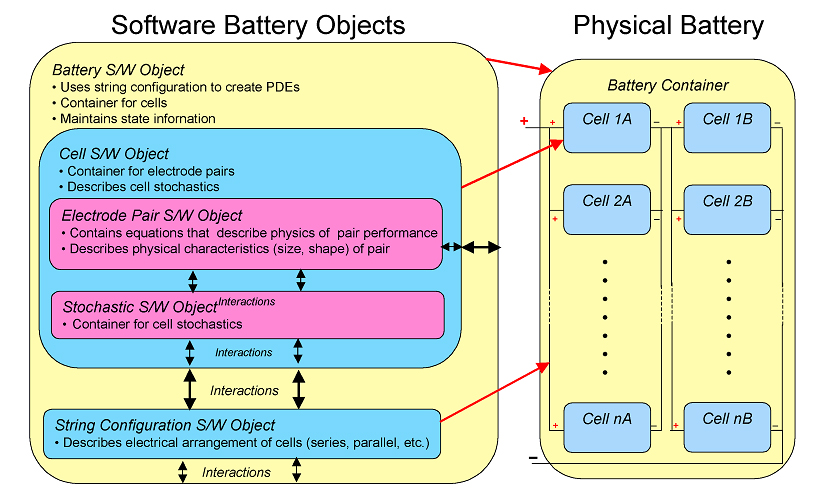 Dakota has been successfully validated against results described in the literature, detailed Fortran SPM, full-physics model code results, and experimental cycling test data. These results show that the Dakota tool can be applicable to any Li-Ion cell chemistry and many different applications, such as batteries for satellites and terrestrial electric vehicles.

In addition, Dakota is extremely engineer-friendly and is useful for a variety of people, including vehicle program managers, power systems and battery engineers, and battery manufacturing engineers. Using Dakota, battery and power system engineers can carry out trade studies on the effect of cell design and cell operating conditions (e.g., rates, temperatures, end-of-charge voltage limit, and depth of discharge) on long-term performance and life. Dakota can help program managers assess the performance and life of new chemistries that otherwise would require expensive and time-consuming life testing.

To date, Dakota has been validated on three different Li-Ion chemistries and can be applicable to many more chemistries upon incorporation of their cell parameters. GAC has since extended the Single Particle Model (SPM) to a wider range of temperatures and discharge rates and has performed long-duration simulations, and has compared the results with actual laboratory data, without significant computational cost. GAC developed processes to accomplish the following: coupling a thermal model with SPM; incorporating new chemistries into the Dakota system that included cell design and parameter information and beginning of life cell laboratory measurements; integrating continuous, dynamic, physics-driven modeling with actual material properties in a flexible computing environment; and developing advanced mathematical simulation techniques that allow accurate, 10-year, multi-cell battery simulations in less than a few days, even when the cells are slightly imbalanced.

There are several potential benefits to the aerospace industry, especially to battery users and power systems designers and developers, as well as cell and battery manufacturers. The Dakota model has the potential to be used for a number of commercial applications where predicting life and performance is essential. Dakota has the capability of being used for the following applications:

The Dakota model will enable proper simulation and demonstration of Li-Ion cell and battery performance in long-duration missions, at a much lower cost compared with the more lengthy real-time acceptance testing. The use of Li-Ion cells and batteries, in place of conventional alkaline systems, will significantly benefit satellite missions in terms of mass and volume savings.

The development of Dakota will significantly help in the evaluation and selection of appropriate cell and battery design and size to meet the desired power capability, power and energy margins and life, as dictated by the LEO, GEO and other related aerospace operations. Also, the Dakota tool is designed to incorporate basic cell design parameters such as plate thickness and material quantities so that the model can be extended to the design of the desired cell configuration, either prismatic, cylindrical, or wound prismatic.

Identification of Early Failure and Rundown

A high-fidelity modeling tool could highlight the limitations for operational conditions that lead to early failure or accelerated rundown that limits mission life. It could also indicate the impact on performance of high pulse power on battery voltage levels during flight operations. For aerospace applications, the lifetime of a spacecraft is very important and extending cell and battery life is crucial.

Simulation of the Entire Operational Life of a Battery

Satellite program managers and their spacecraft and power systems engineers need a tool that enables them to make cell and battery choices based on projected life and performance in lieu of 5-10 year life testing in a laboratory. This would give users the opportunity to make cell and battery selection decisions based on shorter laboratory tests and simulated testing of the entire life of a battery. The users would also benefit from having a tool that will assist them in making power system design and operation decisions by being able to simulate various power management protocols, including extended ground storage and pulse power requirements, before the satellite is designed and built.

Satellite operations engineers and managers need a tool to simulate future battery usage and predict the impact on the battery margins, health, and life. This is especially useful when priorities for satellite services, and corresponding energy requirements, might possibly exceed battery capacity margins for continued healthful battery operation. In addition, such a tool could be useful in troubleshooting battery or power system problems arising during a mission.

Because the Dakota Battery Performance and Operations Modeling and Simulation Tool is based on electrochemical first principles and cell design parameters, its predictions of cell and battery performance, especially after prolonged storage and cycling or unusual cell rundown or divergence, will help identify the criticality of the cell design and fabrication parameters on the performance. Recognition of manufacturing process changes could be identified when the test results do not mirror model output. It is thus possible to ensure cell robustness by focusing on these parameters during manufacturing.

Electric Vehicles and other Commercial Applications
An obvious application of Dakota is in modeling and simulation of Li-Ion batteries for electric vehicles and other applications where Li-Ion cell, battery, and power systems performance prediction are desired in making important energy storage engineering and project decisions. 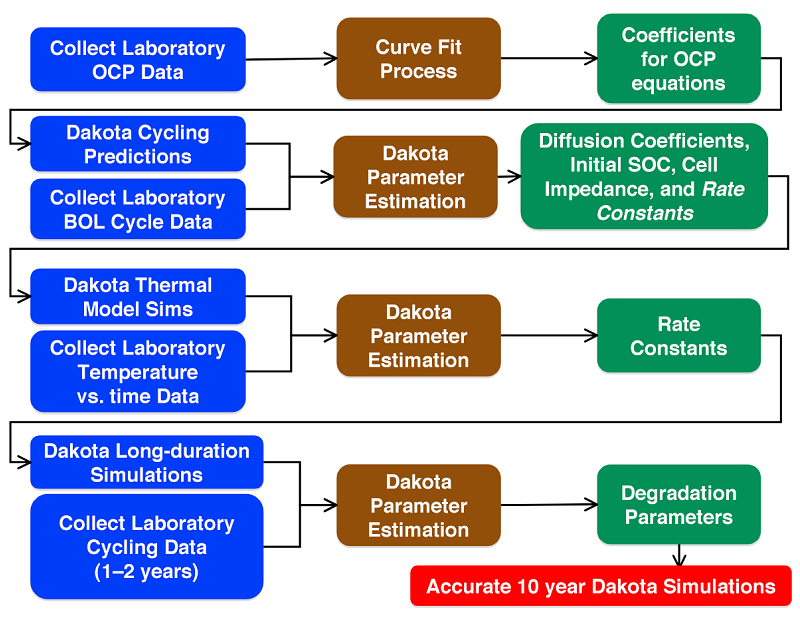