In order to improve Mars exploration new tools are needed besides orbiting probes and landers. Aerial robots (or aerobots) are another feasible tool for exploration and preparation for future missions including sample return. An aerobot can provide images at a scale and resolution relevant for scientifically valuable and safe lander and rover operation, and can fill the gap in data resolution between orbit and ground. Global Aerospace Corporation’s personnel had major involvement in NASA’s Mars balloon efforts, and helped conduct a study to explore the feasibility of a Mars Aerobot/Balloon System (MABS) Mission. 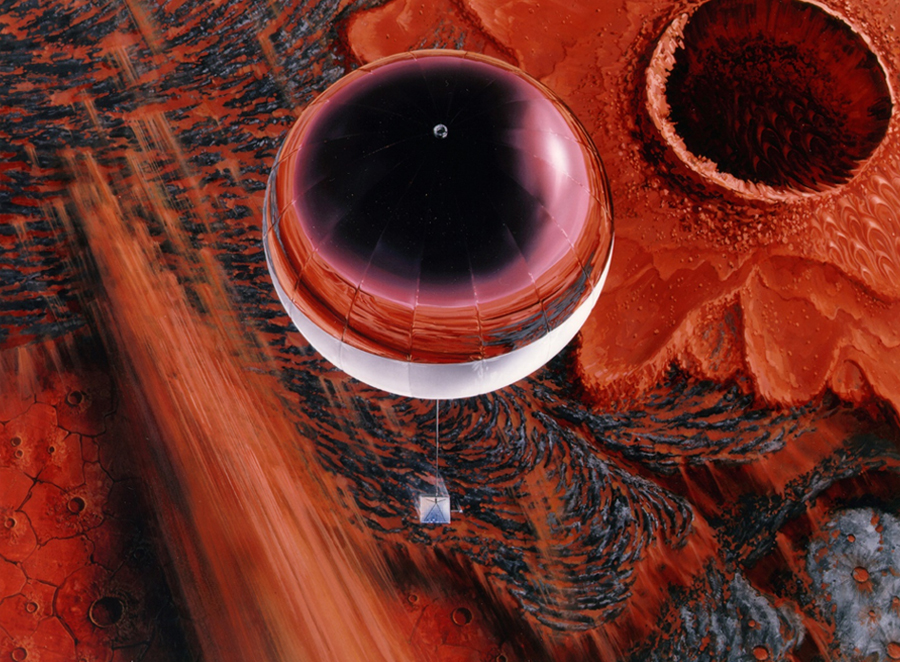 The MABS program built upon the technology advances from previous aerobot/balloon concepts. In the mid 1980’s, the Soviets and the French began collaborating on a Mars Aerostat mission set to depart in 1994. The Soviets planned to put two spacecraft in orbit around Mars, which would release landers and balloons to gather data on the Martian surface to send back to the orbiters, which would in the meantime make their own observations from space. “Mars 94” came to include more than 20 countries, which included the former Soviet bloc nations, France, Germany, Japan, the United Kingdom, and the United States (read more). In 1994, a Mars balloon project was proposed in the United States, under the NASA Discovery Program. The Mars Aerial Platform (MAP) involved a superpressure balloon bearing a small gondola, intended to float at a constant atmospheric density in expected Martian environmental conditions. Both the Russian-French Martian Aerostat and the American MAP were a basis for MABS. 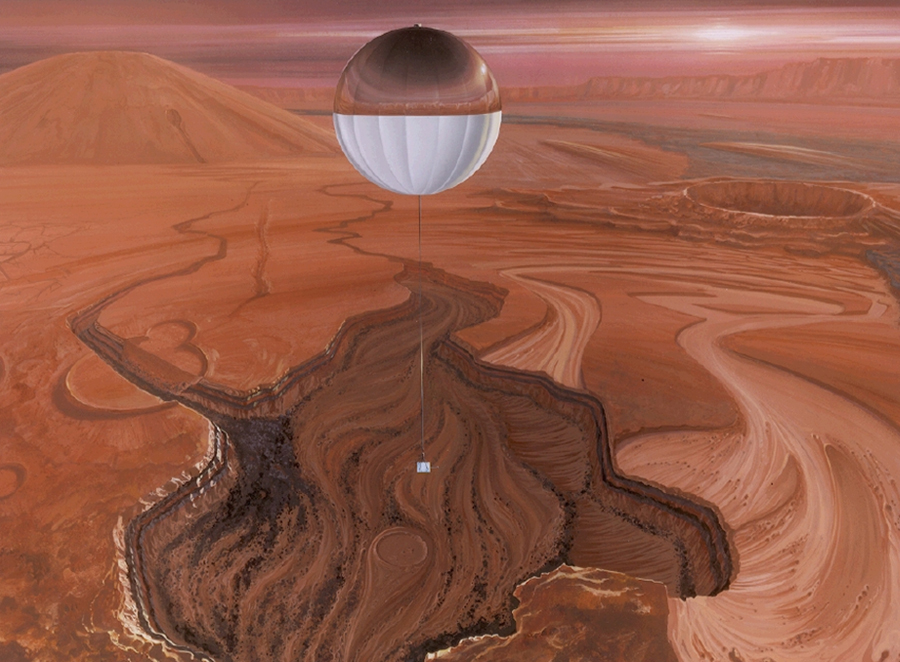 Artist’s Concept of MABS Flying over a Martian Canyon

A Mars Aerobot/Balloon can make a significantly closer approach to the surface of Mars compared with orbiters. The balloon would carry instrumentation to collect higher-resolution visible and infrared images and large amounts of spectroscopic data over greater reaches of the planet. Higher-resolution data are crucial for determining the best landing sites for landers and rovers, both in terms of scientific interest and for avoiding damage from rocks upon landing. Data from the Viking landers revealed approximately 80 major geologic units (i.e., regions where rocks are of the same kind and age range); gathering samples from all of those sites would be difficult. However, high-resolution data from an aerobot would be useful for selecting the best landing sites to reach as many different scientifically interesting terrains as possible. The data would also aid in calibration of Martian maps and data collected by orbiters. The mission would also involve detecting and mapping ice and water below the surface, measuring atmospheric properties and winds in situ, and placing instrument packages at various scientifically interesting sites on the Martian surface.

The design of a Mars balloon mission needs to take into account all the possible environmental factors. Extreme Martian environmental conditions include for example winds up to 30 m/s during the Martian winter, night-day temperature differences, and radiation both coming directly from the sun and reflected off the Martian surface. A mission spanning months would encounter most, if not all, of such adverse conditions.

There are other factors that need to be considered. The balloon material must first remain intact after sterilization, folding, and packaging for launch. Then, it must survive the trip from Earth to Mars without damage from the tight folding, low temperatures, or radiation. Upon entry into the Mars atmosphere, the balloon and payload have to be protected against high g forces, and then stay intact through deployment and inflation. The balloon delivery system plays a major role, maintaining the balloon at a constant temperature and protecting against radiation, placing the entry vehicle in the required entry corridor, and slowing the entry vehicle before balloon deployment and inflation can begin. 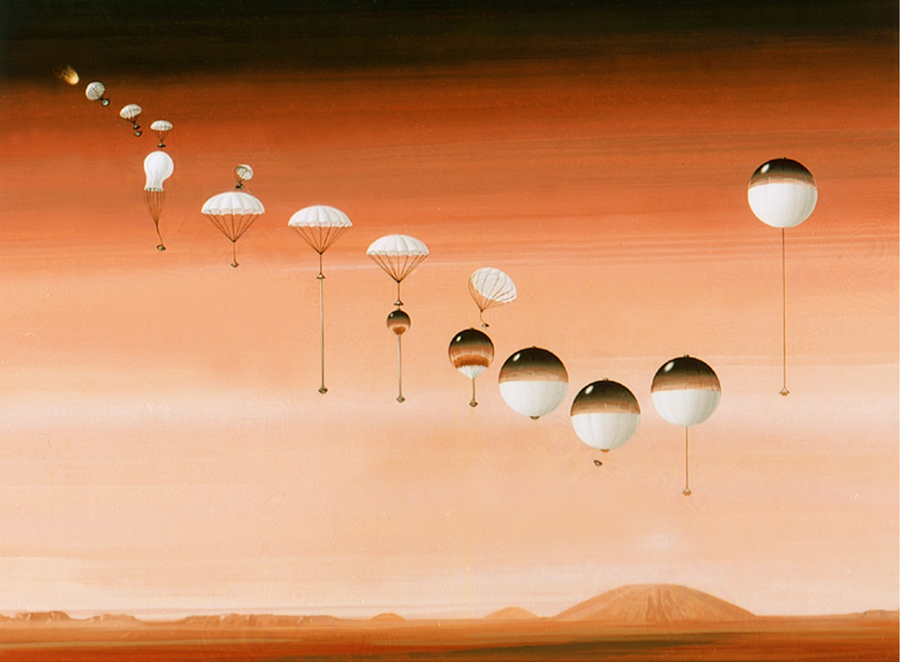 Dust storms would also reduce exposure to solar radiation, reducing temperature extremes and therefore avoiding the necessity of increased balloon material strength. However, dust storms can vary with the seasons, so the balloon has to be prepared for lower dust conditions and the resulting swings in temperature. If the balloon travels over Martian surface areas that have a high thermal inertia, it must withstand a more constant level of infrared reflection over the day-to-night cycles. Areas with a lower albedo will be more favorable because of less reflection. Additionally, solar flux varies with the seasons, and the balloon needs to be prepared for extremes of diurnal variation, especially the resulting large variations in atmospheric pressure near the Martian surface. All the worst possible conditions were taken into account, as the length of the mission increases the likelihood of encountering all of these extremes.

Global Aerospace Corporation (GAC) has state of the art knowledge in the design and planning of Mars balloon system missions. GAC has the experience to assess the technical feasibility of long duration Mars aerobot missions and develop all aspects of the mission including formulation of a baseline concept, identification of technology requirements, and planning of cost and schedule. GAC’s technical expertise spans several science and engineering disciplines, which allows our team to attack and solve the hardest technical issues involved with the design and the implementation of a space exploration mission.