The balloons will serve a dual purpose as independent explorers and as micro probes (MIPs) delivery systems for targeted observations. Flight path control capabilities will offer unprecedented opportunities in high-resolution targeted observations of both atmospheric and surface phenomena. Multifunctional micro probes will be deployed from the balloons once over the target areas, and perform a multitude of functions, such as atmospheric profiling (Jupiter, Saturn), or surface exploration (Mars, Venus, Titan), relaying data back to the balloons. Key elements of this new concept are: 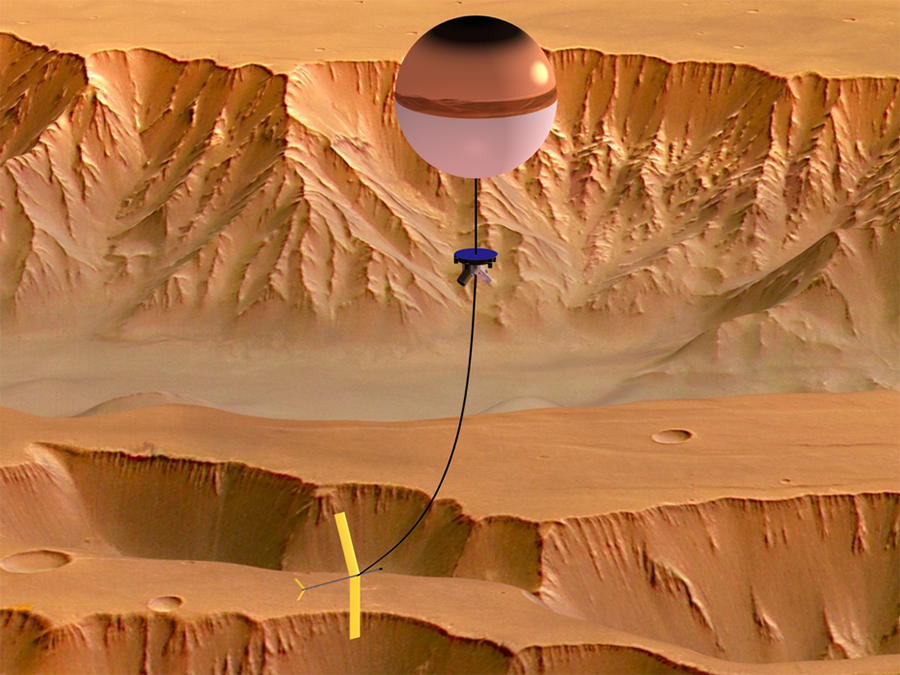 A balloon-based observational platform has several advantages. The balloons can be made of lightweight materials: not only are the materials themselves inexpensive, but reducing mass lowers launch costs. Compared with orbiters, balloons can more closely examine large areas and thus obtain higher-resolution images. In addition, in situ atmospheric chemistry analyses can only be performed from a balloon. Some critical data, such as magnetic field measurements or subsurface water search on Mars, can be more easily obtained from an atmospheric platform. A properly instrumented balloon that covers large areas in a grid pattern could facilitate identifying methane plumes. As for Venus, due to the dense cloud coverage, an orbiter in space can only detect radio and certain infrared wavelengths; a closer approach via a balloon-based platform would allow for visible spectrum imaging. Deployment of probes from balloons will be far less challenging compared with deployment of landers or entry vehicles from orbiters, in terms of more precise targeting and thermal shielding during entry.

The balloons will release numerous micro probes over designated target areas that can gather data from more layers of the atmosphere and more closely approach the planet surface to obtain higher resolution geological data. The probes can perform many different functions: for example, atmospheric profiling on Jupiter and Saturn and surface exploration on Mars, Venus, and Titan. These data will be relayed back to the balloons, and from there back to Earth.

These microprobes are possible because of the miniaturization of sensors and electronics. This enables radically new measurements, such as multiple soundings of the atmosphere with small, densely packed sondes bearing multiple sensors, or positioning of multiple light probes along a balloon-borne tether for atmospheric profiling. The reduction of mass would allow more scientific instruments to be carried on board the observational platform.

The balloon guidance system of the DARE platforms consists of a wing hanging on its side below the balloon on a tether several kilometers in length. Due to the difference in winds between the altitudes of the balloon and the wing, the wing experiences relative winds that create a sideways lifting force, such that the balloon can travel across the winds as well as with them. While this system was developed for operation in the Earth’s stratosphere, it could be used at any planetary body with wind differences at different altitudes in its atmosphere.

Venus has been selected for a more focused study of the DARE system architecture because its planetary atmosphere allows for a high degree of trajectory control, the balloon technology has been previously tested in the Venus atmosphere, and because of the high scientific priority of a mission to this planet.

A Venus mission would: 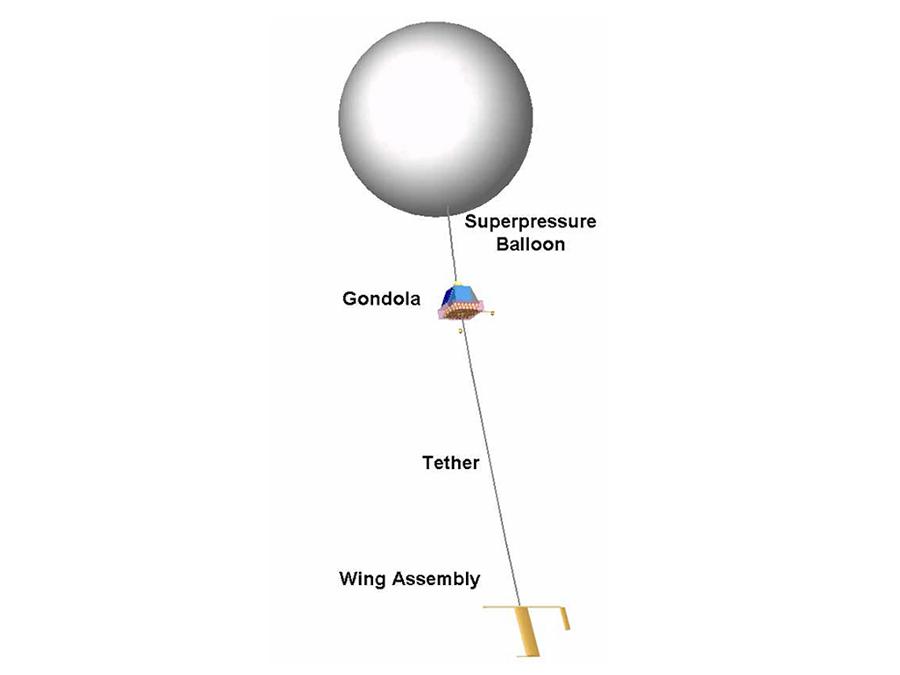 A Venus DARE mission would obtain profiles of atmospheric properties from the top of the cloud cover to the surface at multiple locations. These measurements would provide a more comprehensive picture of the dynamics of the Venus atmosphere, supporting future Venus exploration with balloons. DARE platforms are well suited for this mission since they can carry multiple meteorological dropsondes and can be repositioned in the atmosphere. Long mission durations would allow sampling at different solar times. We envision a DARE platform floating in the atmosphere of Venus at 54 km altitude for 100-days. The DARE platform would carry multiple (100) small (less than 1 kg) dropsondes to be deployed throughout the atmosphere to obtain atmospheric profiles at different latitudes, longitudes and times of the day. The DARE platform can also carry fixed instrumentation on the gondola for other experiments. The DARE platform can travel to obtain measurements at multiple latitudes across the planet and at the day and night sides. Upon their descent, the dropsondes would transmit data to the gondola; the data would then be relayed directly to Earth. The horizontal atmospheric winds throughout the atmosphere would be determined from Doppler measurements of the probe signal received at the gondola and on Earth by the Deep Space Network (DSN) using very-long-baseline interferometry (VLBI) techniques. Horizontal winds at the float level would be determined by DSN by tracking the DARE platform.

The DARE architecture will provide a new vantage point for observations of planetary atmospheres and surfaces and will enable unique observations. DARE will also increase our understanding of the formation and evolution of planetary bodies in the Solar System, by searching for life on other planets, by enabling investigation of the compositions and resources of planetary bodies, by enabling new technical approaches and capabilities, by helping to create a 21st century scientific and technical workforce, and by enabling human exploration through cooperative robotic missions. 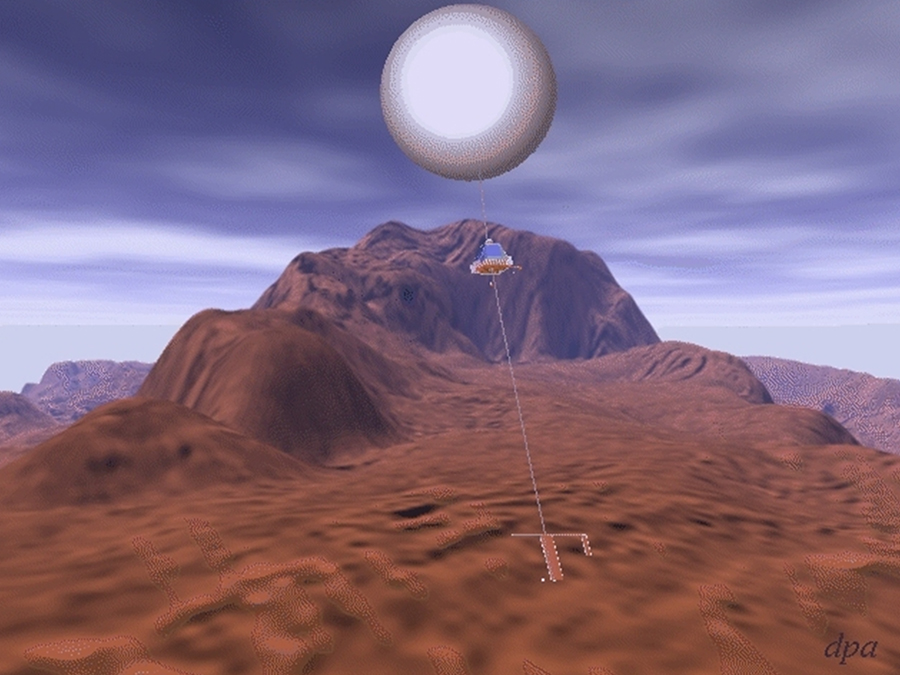 Artist’s Concept of DARE at Venus