Global Aerospace Corporation (GAC) has developed a lightweight Montgolfier (i.e., hot air) balloon system concept for floating in the winds of Saturn’s moon, Titan, in order to study its atmosphere and surface. This Titan Hot Air Balloon can maintain a desired altitude, can be stowed easily for the trip from Earth, and can be easily deployed and inflated for operation in the Titan environment. The balloon would be able to descend to the surface for scientific observation and to deploy tethered sampling systems. This Titan hot-air balloon concept will provide mobility capabilities for future Titan exploration platforms. Possible scientific exploration objectives are the determination of the origin and evolution of Titan’s atmosphere; cycling of carbon through the interior, surface and atmosphere on all timescales and in all phases; and the prebiotic chemistry in the surface and immediate subsurface. To achieve these objectives, the Titan hot air balloon must be capable of (a) long-duration flight between the surface and 10 km altitude, (b) long-distance flights in ambient winds, and (c) payload soft-landing and surface sampling. 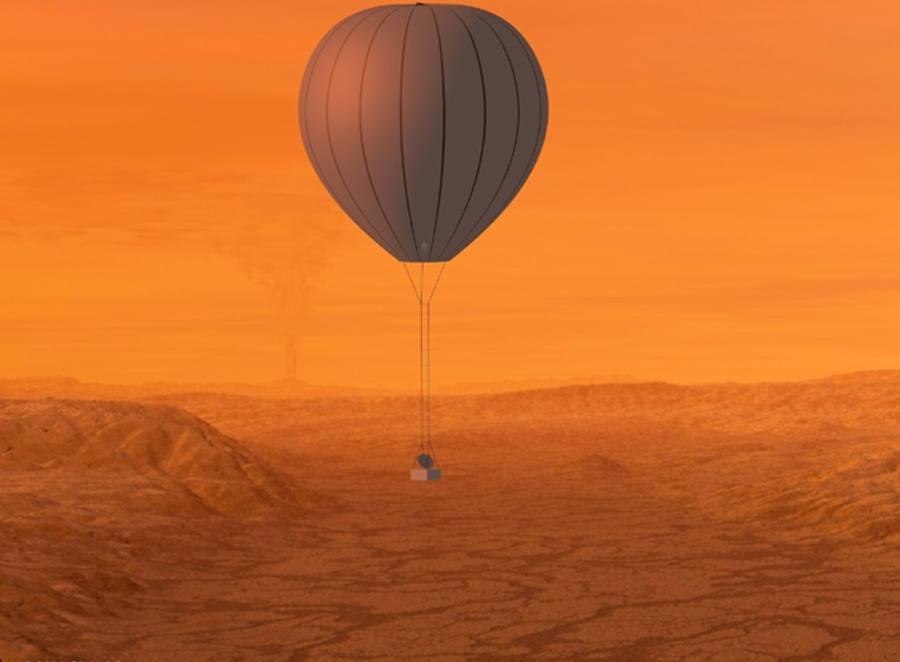 The Titan Hot Air Balloon System concept envisioned by GAC introduces several innovative technologies: a low-mass envelope system; an altitude control system; a Radioisotope Power System (RPS) heat exchanger; a stowage, deployment, and inflation system; and a buoyancy system to maintain or change altitude to access desirable winds or descend to the surface. Waste energy from the RPS would heat Titan’s atmosphere (i.e., nitrogen gas) within the balloon. Releasing warm buoyant gas would cause the balloon to descend. By closing the apex valve, the buoyant atmospheric gas inside the balloon would warm and the balloon would ascend. GAC’s unique, proprietary envelope design ensures a minimum loss of heat to the environment, thus reducing the requirements on the RPS.

Titan atmospheric data have been gathered from observations by the Voyager spacecraft, the Cassini Orbiter, the Huygens probe, adaptive optics on ground-based telescopes, and atmospheric modeling. The Cassini spacecraft in its ongoing mission is still performing remote observations of Titan during flybys, and keeps gathering information on winds near the surface.

What should the balloon be prepared for in Titan’s environment?

Any Titan hot air balloon design must account for temperatures approaching -200 deg C at the deployment altitude, atmospheric density and pressure as a function of altitude, estimates of turbulence in the atmosphere, surface wind speeds, infrared radiation, and methane ice or liquid condensates that could increase the balloon’s mass as well as its heat loss. There may be lightning at cloud layers found at 8-16 km and 20-30 km. Atmospheric gravitational tides may generate atmospheric waves and turbulence. Surface winds can cause increases in forced convection and envelope gas cooling, reducing the necessary lift during critical surface sampling operations. Any envelope material that remains in close proximity to an operating RPS for long durations will be irradiated by high-energy particles (gamma rays and neutrons).

The driving high-level requirements for the balloon material are expected to be the low areal density and the high flexibility in the very cold Titan environment. Other key material requirements include tear strength, ability to be reliably seamed, and compatibility with (and possibly being repellent to) liquid methane.

GAC can use lessons learned from past research and development that was performed by NASA and others. Studies at JPL have investigated designs, envelope materials, and deployment and inflation concepts for Titan airship vehicles. Dr. Jacques Blamont (CNES) investigated the possibility of solar Montgolfier balloons at Titan well before the Voyager flybys. GAC has its own expertise in balloon trajectory control, as shown in the StratoSail® balloon guidance system and the trajectory and performance models for Earth and planetary balloons (Navajo).

Global Aerospace Corporation (GAC) has developed a trajectory simulation for a Titan hot air balloon concept that could explore near-surface regions. These balloons would be targeted to fly in the lower atmosphere, between 1 and 20 km above Titan’s surface. From there, they would descend to gather and analyze samples. The correct trajectories for the descents must be calculated by taking into account factors like the season at the region of interest and the conditions at different locations (latitudes) and altitudes. Zonal wind, time, altitude, and latitude data have been input into GAC’s Trajectory Simulation Model (TSM) along with the balloon’s dimensions, to understand if the trajectories cover a wide or a narrow area over Titan and if they are similar even if coming from different locations in the atmosphere. Two models of the zonal winds were developed, based on parameterization of two different global climate models (GCMs). Trajectories were simulated for a period of 180 Earth days and, during each simulation, altitude was assumed constant; several simulations were run for a range of seasons, latitudes, and altitudes.

The goal was to characterize the area that a balloon on Titan would cover. To do that, one needs to know what the trajectory of the balloon would be to reach the desired area at a given position (latitude) and time, given the zonal and tidal wind characteristics. The largest coverage is possible with weak zonal winds so that tidal winds have more effect.