Global Aerospace Corporation (GAC) is developing a revolutionary system architecture for exploration of planetary atmospheres and surfaces from atmospheric altitudes. This innovative system architecture relies upon the use of Directed Aerial Robot Explorers (DARE), which essentially are autonomous balloons with trajectory control capabilities that can deploy groups of miniature probes over multiple target areas. The balloons will follow the winds while in passive-exploring mode or steer across the winds towards regions of interest while in active-directed mode. 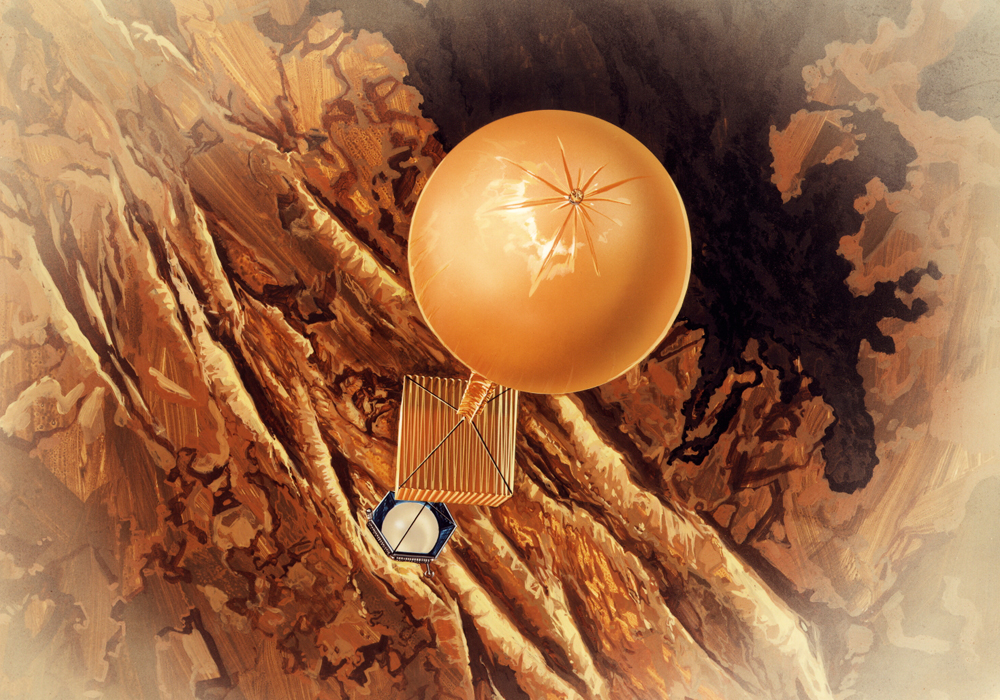 The balloons will serve a dual purpose as independent explorers and as micro probes (MIPs) delivery systems for targeted observations. Trajectory control capabilities will offer unprecedented opportunities in high-resolution targeted observations of both atmospheric and surface phenomena. Multifunctional micro probes will be deployed from the balloons once over the target areas, and perform a multitude of functions, such as atmospheric profiling (Jupiter, Saturn), or surface exploration (Mars, Venus, Titan), relaying data back to the balloons.

Venus has been selected as the model for a more focused study of the DARE system architecture because its atmospheric conditions permit a high degree of trajectory control, the balloon technology has been previously tested in the Venus atmosphere, and because of the high scientific priority of a mission to this planet. A Venus mission would use lessons learned from past Venus balloon missions, enable global coverage and targeted observations, perform in situ atmospheric profiling, enable surface imaging in the visible to infrared spectrum, and characterize meridional circulation and atmospheric superrotation. 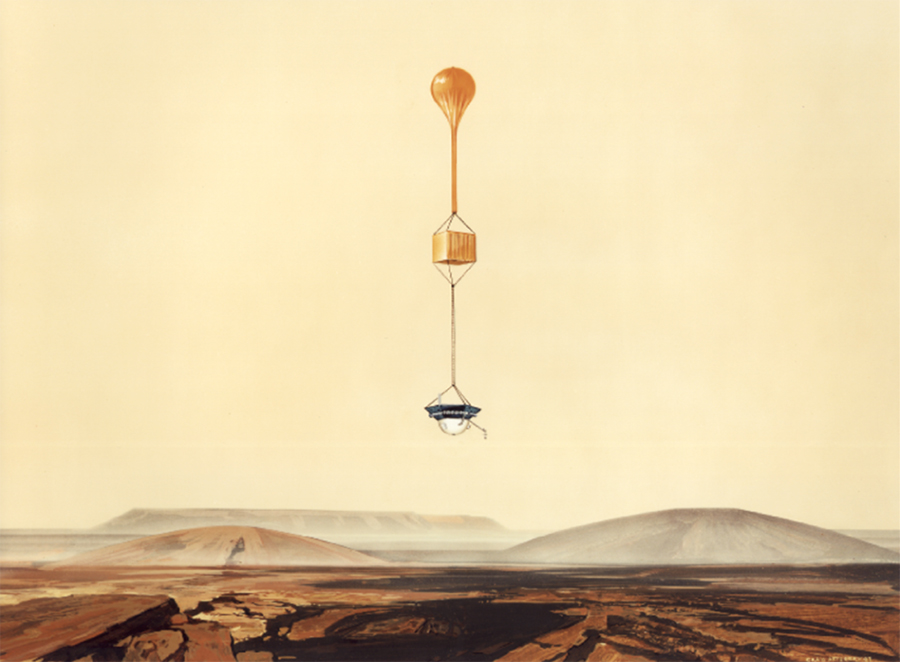 Why use balloons to investigate Venus?

While the Magellan orbiter taught us a lot about Venus’ geologic history, it left certain questions unanswered. In particular, it could not gather further atmospheric data about the lower level of the atmosphere (below 20 km altitude) and its superrotation, and about atmospheric interactions with Venus’ surface. Magellan’s data also left questions unanswered about crust composition and variability, as well as the interior. Much closer approaches to Venus’ surface are necessary. However, the instruments must withstand an especially hostile environment: an atmospheric pressure more than 90 times Earth’s and a temperature reaching 460 deg C, hot enough to melt lead. No probe or lander would last long enough to gather more than limited data. A balloon could move back and forth between extremes of conditions, collecting data in a wide variety of locations.

In 1985, the Soviets, French, and the U.S. collaborated on the Vega balloon experiment, in which two balloons were deployed into the atmosphere of Venus by the Vega 1 and Vega 2 spacecraft, respectively, four days apart from each; to date, these balloons have been the only ones placed into the atmosphere of another planet. The Vega balloons operated for approximately 2 days each, at an altitude of 54 kilometers, until their batteries were depleted. Even during this short period of time, valuable meteorological data were gathered by on-board sensors and Earth-based radio tracking.

BEV involves development of technologies needed for Venus robotic balloons, in turn to enable design and testing of the Venus Flyer Robot, a telerobotic balloon which would travel throughout the Venus atmosphere and locate scientifically interesting landing sites. Specifically, BEV addresses the verification and characterization of altitude control concepts, lightweight balloon deployment, design of a strong yet lightweight balloon envelope, development of balloon navigation techniques, generation of power in Venus clouds, and mapping of surface topography from high altitudes.

The Venus Flyer Robot would be capable of descending to the surface, measuring lower atmospheric conditions on the way down, and then it would be able to analyze the surface composition with instruments mounted onto a rope or “snake”. 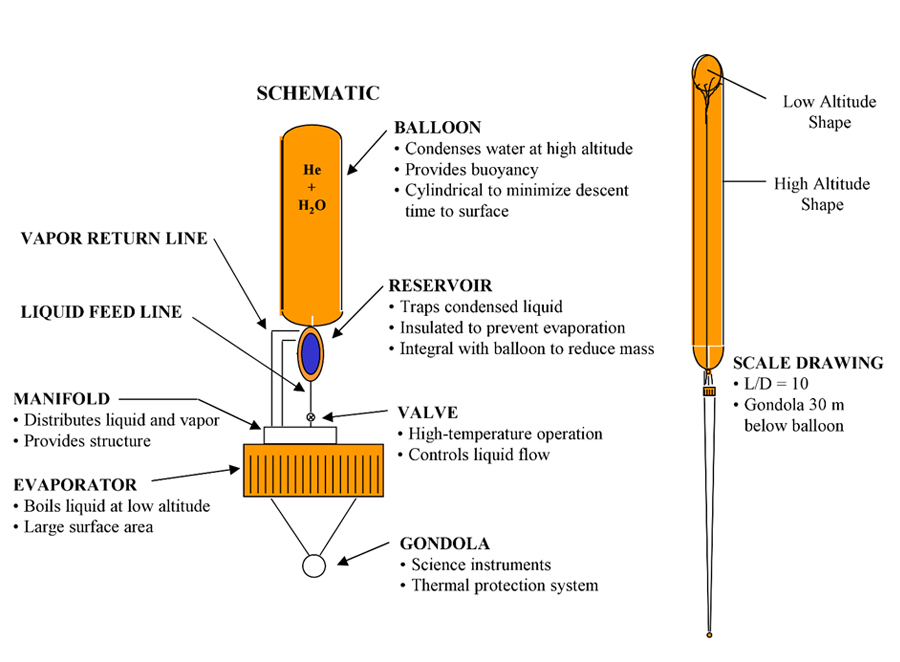 Later, the BEV and VFR concepts were merged into VEGAS – the Venus Geoscience Aerobot Study. VEGAS would have the capability of investigating both the atmosphere and the planet itself. Atmospheric studies would include composition and dynamics of the lower atmosphere, interactions of atmosphere with the surface, and outgassing to the exosphere. The balloon-borne payload would gather atmospheric samples at many different altitudes over extended periods of time. High-resolution visible and infrared imaging would provide better mineralogy and geochemistry data, and even more data would be obtained at close range during descents to the surface.

To perform these studies, the balloon and payload must be designed to face an especially hostile environment. First, during transit from the Earth to Venus, the material must be able to tolerate a low temperature while being tightly packaged and exposed to electromagnetic and particle radiation. Then, the package must withstand sharp deceleration—to as much as 500 g—upon entering the atmosphere. During deployment, the balloon material must be able to withstand pressures rising from 0.5 to 5 bars (Earth atmospheres) and temperatures rising from 10 to 170 deg C, with high loads (approximately 3 to 6 g) on the extended balloon envelope. As the balloon inflates, it has to be resistant to wind shear in a high-density atmosphere, while not tangling with the payload. Then, it must withstand up to 85% concentrations of sulfuric acid while descending to Venus’ surface.

Once the balloon and payload reach Venus’ surface, they must withstand an atmospheric pressure more than 90 times Earth’s and a temperature reaching 460 deg C—hot enough to melt lead. The balloon must all function within those conditions for 2-hour periods, and the gondola must maintain its own inside temperature at approximately 30 deg C to protect the instrumentation that is inside. Then, the balloon materials need to withstand the stresses of thermal cycling during repeat descents and ascents back to 60 km (-20 degrees C, 0.2 bars), where solar energy can be collected and stored, and data can be transmitted directly to Earth—and in the meantime, the solar arrays need to be protected. Cycling must occur at a rate slow enough to permit as much data collection as possible at any level while not exposing the balloon to surface conditions for too long. The balloon material must have low permeability to both the lifting and the phase change liquid/gases. Even with all these requirements, the material should be available off the shelf and not challenging to manufacture.